by Tricia Booker Photography on August 19, 2014 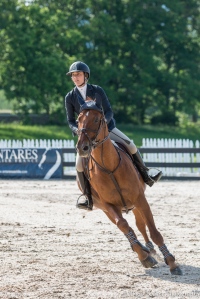 Alex Tippett and El Cano added yet another blue ribbon to their collection during the Winston National, held August 13-17 in Culpeper, Virginia.

Alex won a High Children’s Jumper class and placed fourth in the $2,000 M&S/NAL Children’s Jumper Classic. “Alex and El Cano were great,” said trainer Denice Perry. “They had the unfortunate position to go first in the jump-off without an opportunity to see anyone else go. They were just a tick slower.”

Virginia Bonnie and Wink And Smile, fresh from their U.S. Pony Finals success in Kentucky, earned the Small/Medium Pony Hunter Reserve Championship in the combined division with 10 ponies. They also returned to the ring to claim victory in the $1,000 Pony Hunter Classic that was open to all ponies. With scores of 85 and 86 in the two-round class, they finished on top.

Virginia also placed third in the classic on Prom Queen, and she earned many other ribbons throughout the week.

Three Rivers also garnered many top awards at the Winston National. With Amanda Tran aboard, he earned the Children’s Hunter, 15-17, Reserve Championship and with Denice in the saddle he was Champion in the HITS Hunter section, winning all three over fences classes in the section.