by Tricia Booker Photography on August 12, 2013 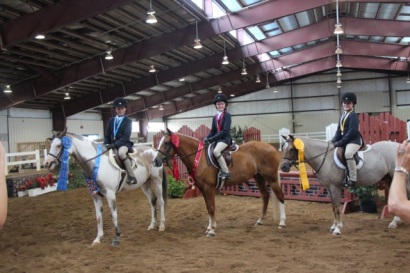 Kathryn and Bert Harrell with McQue

A hug from Denice

Thanks to the ponies!

Skyland Farm riders and horses enjoyed a spectacular competition at the Lexington National Horse Show in Virginia this past weekend. The show featured the Virginia Horse Show Association/EMO Medal Finals Festival, a showcase of equitation competitions and finals.

Skyland Farm riders took the top two spots in the field of 17 riders contesting the VHSA/EMO Pony Medal Final. Adam Edgar, who trains with Carol Eichner, joined the Skyland Farm team for the show as Carol was unable to be there. “He rode beautifully,” said Denice Perry, who coached Adam throughout the show. “He deserved to win. The test included a halt and two simple changes of lead down the long side of the arena. He did it perfectly.”

Adam, age 12, also earned blue ribbons aboard Carol’s pony Damingo in the Children’s Small/Medium Pony section and was second in the VHC Pony Equitation Derby to round out his successful weekend. “Most of the time Adam rides with Carol, and he comes to me for occasional lessons,” said Denice. “And I was fortunate enough to help him this weekend.  It was so much fun.”

Virginia Bonnie, age 9, earned the red ribbon in the VHSA/EMO Pony Medal Final and took the Medium Pony Hunter Reserve Championship aboard Prom Queen. “Virginia did a wonderful job this weekend,” said Denice. “She just started riding in the Medium Pony Hunter section this summer, and now she’s qualified for U.S. Pony Finals – West Coast. After a summer spent in Virginia, she’ll be returning home to San Francisco in September.”

Kathryn Harrell also enjoyed great success at the Lexington National. Aboard McQue, Kathryn earned top ribbons in the Pre-Adult Hunter section. “Kathryn had to take some time off, and it’s her goal now to get back to the three-foot adult amateurs,” said Denice. “She’s taking it step-by-step to achieve that goal. McQue is a great horse for her. He’s super brave and gives her a lot of confidence. During the show one of their divisions was switched to a different arena, and he walked right in and clocked around. He was as brave as Dick Tracy!”