by Tricia Booker Photography on September 10, 2012

The Impressionist and Chiara Parlagreco on the way to victory in the $250,000 HITS Hunter Prix.

Chiara and The Impressionist did it! They dominated the $250,000 HITS Hunter Prix on the second day, winning both rounds, to take the top check home for Skyland Farm and owner Ainsley Treptow!

This was the richest class in the country for Junior and Amateur riders, and the competition was tough. Even with all the pressure, Chiara held off all contenders and guided “Nemo” to the best overall score and won three of the four rounds outright.

Chiara originally qualified for the Hunter Prix aboard Skyland Farm’s Placido, but when he suffered a minor injury just a day before the competition began, Ainsley Treptow offered her Nemo as a substitute mount. Trainer Denice Perry and her husband Roy drove Nemo up to New York from Virginia on Thursday evening, and Chiara and Nemo started the four-round competition the following morning.

After the first two rounds, Chiara said: “This horse was amazing. He was super quiet, and his cross-country experience came in handy when jumping the bank. At this point, it’s about so much more than the money – I am just really excited to be here.”

With her characteristic focus and smooth style, Chiara guided Nemo to two more beautiful rounds to clinch the victory on Sunday, September 9.

“She rode beautifully. She didn’t make a mistake,” said Denice. “Roy and I were so nervous watching her walk into the ring for the final round, but they just went in and put in another gorgeous trip. He’s such a great horse. He just loves his job and is such an incredible jumper that it just makes the perfect picture as they go around.” 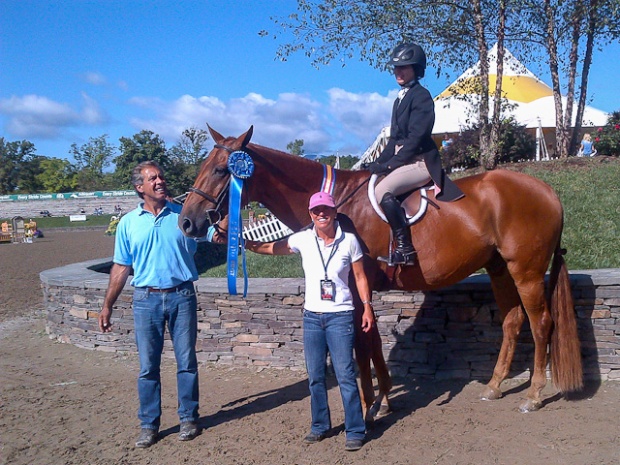 Roy and Denice Perry with Chiara Parlagreco and The Impressionist.